Whilst the road work authorities and the undertakers are the key players in the Scottish road works community, there are a number of bodies in place which have a valuable role. The following diagram sets out the relationships between these bodies: 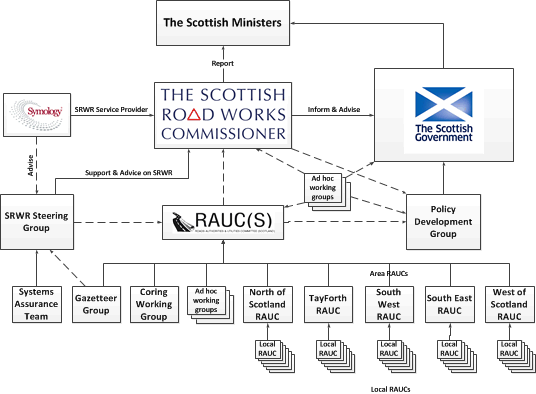 Here is a list of authorities and undertakers active in Scotland.

Highways Authorities and Utilities Committee (United Kingdom) (HAUC(UK)) - is a UK group which is a forum for matters of mutual interest in relation to street works.

1. The Roads and Utilities Committee of Scotland RAUC(S) shall provide support and advice to the Scottish Road Works Commissioner (SRWC), with a view to improving the planning, co-ordination and quality of road works in Scotland.

2. RAUC(S) shall support and advise the SRWC in undertaking his general functions of:

a. Monitoring the carrying out of works in roads in Scotland;

b. Promoting compliance with the 1991 Act and obligations imposed under it; and

c. Promoting the pursuit of good practice by the wider road works community.

3. RAUC(S) will discuss subjects of interest and, where appropriate, will aim to agree a joint course of action including, for example, the development of best practice and performance reports, advice on future legislation and the submission of representations to the Scottish Government, SRWC, HAUC UK and other organisations.

4. Meetings are normally quarterly or as required by business.

5. The Committee comprises representatives appointed by SJUG, local road works authority appointees and representatives from the Scottish Government, Transport Scotland and Network Rail. Other appropriate bodies may be invited to attend as dictated by the business of the meeting. The Joint Chairs of HAUC UK have a standing invitation to attend, as does the SRWC.

6. In the case of SJUG, representation will consist of the Chairman of SJUG who, ex officio, is Undertaker Co-Chair, and twelve members appointed from the following undertaker groups:

8. The Scottish Government is represented as the "legislative" body and a Transport Scotland representative attends to represent the trunk road interests as road works authority.

9. Network Rail is also a member of RAUC(S).

10. Members of the Committee may send substitutes from their organisation to meetings and additional members may be co-opted when necessary.

11. Chairs of Area RAUCs are members of RAUC(S) and are counted within the numbers given above (paragraphs 6 and 7 above).

a. Policy Working Group: made up of the RAUC(S) Co-Chairs (Vice Co-Chairs as alternates), the SRWC and representatives from Scottish Government, NJUG and SCOTS. It is responsible for developing strategic policy on road works and determining possible future legislative requirements.

b. SRWR Management Group: responsible for assisting the SRWC (as keeper of the SRWR) in the development and day-to-day operational management of the SRWR.

c. Gazetteer Group: responsible for issues arising from the National Street Gazetteer which is required for the effective operation of the SRWR. (Note - this is one Group where equal numbers may not be appropriate - see 14 below).

CO-CHAIRS AND CHAIR OF THE SRWR MANAGEMENT GROUP

15. RAUC(S) operates with Co-chairs who take it in turn to chair RAUC(S) Meetings. To assist in providing continuity, Co-Chairs and the Chair of the SRWR Management Group each normally serve for 2 years with the staggered 'retiral' of one Co-Chair/Chair each year. Vice Co-Chairs are appointed to establish alternates and the first in line of succession.

16. RAUC(S) is a member of the HAUC(UK) Committee in its role as a forum for matters of mutual interest in relation to street works.

17. RAUC(S) shall review complex disputes and reach decisions. Where disputes cannot be resolved they shall be passed to the SRWC to be settled.

MODEL TERMS OF REFERENCE AND CONSTITUTION FOR AREA RAUCS

(3) To provide a forum for discussion on issues relevant on an area basis;

(4) To review straightforward local disputes brought to it and reach decisions. Where decisions are not accepted by the parties the dispute shall be referred to the SRWC;

(5) To monitor the performance regionally of both the undertakers and the road works authorities under the New Roads and Street Works Act 1991;

(6) To refer local initiatives to RAUC(S) for recommended adoption nationally;

(7) To promote mutually beneficial good working practices in the light of RAUC(S) policy and current legislation; and

(8) To deal with specific remits from RAUC(S) within required timescales and to report back to RAUC(S) on these.

(1)Representatives will be appointed by the undertaker and road works authorities. The client should attend meetings rather than the contractor/agent. Representatives from other organisations such as contractors may be invited to meetings with observer status at the discretion of the Area RAUC. The SRWC has a standing invitation to be represented.

(2) The Chairmanship and secretariat shall rotate between the undertaker and/or road works authorities or by arrangement locally; A Line of succession is established with the next Chair being designated as Vice Chair.

(3) All organisations will be able to submit matters for inclusion on the agenda for meetings;

(4) Meetings will be held normally on a quarterly basis, or at the request of the Joint Chairs (or Secretaries if local arrangements allow);

(5) Members may send substitutes to meetings and additional members may be co-opted when necessary; and

(6) The Area RAUCs may set up working parties and sub-groups to work on particular subjects.

To co-ordinate works on roads to minimise inconvenience to road users, involving: `

(b) medium term and annual programmes (both capital and maintenance) for works for road purposes and road works;

(d) reviewing performance at local level, including damage prevention; and

Wider issues will be referred up to Area RAUCs.

The Highway Authorities and Utilities Committee (HAUC(UK)) was established in 1986 by the constituent bodies of the local Highway Authorities and the Utilities to assist the Secretary of State in arriving at proposals for new street works legislation. HAUC(UK) played a significant role in the drawing up of the New Roads and Street Works Act 1991, its subsidiary legislation and associated Codes of Practice.

The main aims of HAUC(UK) are:

HAUC(UK) is currently working with the Department for Transport on the implementation of the Traffic Management Act 2004 (TMA) and associated secondary legislation.